Naked: Larva devoid of body hairs or setae; pupa not enclosed in a cocoon or other covering.
National forest: Federally owned land managed to provide wood, water, and other uses for the benefit of the people of the United States. National forests are under the administration of the Forest Service of the U.S. Department of Agriculture.
National park: 1. Federally owned land managed to maintain areas of outstanding and unique scenery and geographic features for public enjoyment. National parks are under the administration of the National Park Service of the U.S. Department of the Interior. 2. The definition of National Park approved by IUCN is: A National Park is a relatively large area (at least 1000 hectares) a. Where one or several ecosystems are not materially altered by human exploitation and occupation, where plant and animal spp, geomorphological sites and habitats are of special scientific, educative and recreative interest or which contains a natural landscapes of great beauty. b. Where the highest competent authority of he country has taken steps to prevent or eliminate as soon as possible, exploitation or occupation in the whole area and to enforce effectively the respect of ecological, geomorphological or aesthetic features which have to its establishment. c. Where visitors are allowed to enter, under special conditions, for inspirational cultural and recreative purposes. 3. An area owned by the government and set aside for the protection and preservation of its outstanding scenery, flora and fauna in natural state. It is accessible to the public for recreation, education, and research activities.
Natural Basal Area: The basal area, determined by site capacity, towards which even-aged stands will tend to converge.

Natural pruning: (syn. self-pruning) The freeing of the stem of a standing tree from its branches through natural death, disintegration, and/or fall, resulting from such causes as decay, deficiency of light or water, or snow, ice, and wind breakage.
Natural regeneration: Renewal of a tree crop by natural seeding, sprouting, suckering, or layering.

Natural Resources Conservation Service (NRCS): The branch of the USDA that coordinates and implements soil conservation practices on private lands. The NRCS can provide woodland owners with detailed information on his or her soil.
Natural Stand (Natural Regeneration): A stand of trees grown from natural seed fall or sprouting.
Natural thinning: Death of trees in a stand as a result of competition.

Nectar: Nectar is a secretion, typically of flowers, that is composed primarily of carbohydrates, that attracts pollinators such as insects and hummingbirds.

Needle cast: Premature browning and dropping of needles caused by a fungus.

Nest planting: Setting out a number of seedlings or seeds close together in a prepared hole, pit, or spot.
New forestry: A forest management philosophy that attempts to retain characteristics of old-growth stands in managed stands.

Niche: The role of an organism within its natural environment that determines its relations with other organisms and ensures its survival is the Ecological niche of that organism. (See: Ecological Niche)

90 % Marginal Confidence Interval: Each parameter estimated (time, latitude, longitude and depth) includes an error value (e.g., a b). The marginal confidence interval is from a-b to a and has been derived so that the true value will fall into this interval 90 percent of the time regardless of the values of other parameters estimated at the same time.
Nitrogen fixer: Some plants (notably many legumes such as clover, peas, beans, and alfalfa) have the ability to transform nitrogen from the air into a form of nitrogen that plants can use. As nitrogen is a key nutrient that often limits growth, nitrogen fixers can influence the fertility of the surrounding soil and the growth of neighboring plants. The actual “fixing” or chemical transformation is performed by bacteria that live in nodules on the roots of the host plant.
Nominal Interest Rate: Predetermined rate of interest; An interest rate given in a contract, which applies irrespective of inflation

Non-impacting treatment: Treatment such as site preparation or pruning which does not affect the regeneration status of the area treated. These treatments are included in REGEN for record-keeping and reporting purposes only.

Nonindustrial private forestland (NIPF): Forestland owned by a private individual, group, or corporation not involved in wood processing. Eighty-five percent of Maryland’s forests are in this category.

Non-production: Disturbed area could be classified into this category at any point following harvesting. Area without a timber production objective.

pH value b/w 8.5 and 10. Also called Black Alkali (the dissolved organic matter present in the soil solution often deposited on the soil surface by evaporation giving it dark colour and accounting for the name “black alkali”) Due to the adverse effect of excessive Na, the permeability of such soils is very low and low aeration as well. (See also: Saline Soil/ White Alkali Soil)
Nontidal wetlands: Wetlands not affected by ocean tides. Nontidal wetlands are subject to special regulations.

Normal age class distribution: A complete series of age classes in such proportions as will permit equal volumes from annual or periodic felling under the given rotation and Silvicultural system. (See: Normal Forest, Normal Growing Stock, Normal series of age gradations).

Normal Forest: That forest which has reached and maintained a practically attainable degree of perfection in all its parts, for the full and continued satisfaction of the objects of management; a standard with which to compare an actual forest so as to bring out its deficiencies for sustained yield management; a forest which, for a given site and given objects of management, is ideally constituted as regards growing stock, age class distribution and increment, and from which the annual or periodic removal of produce equal to the increment can be continued indefinitely without endangering future yields.
Normal series of age gradations: A complete series of annual age classes.
Normal yield: The yield from a normal forest.
Normal yield table:   Estimated stand volume per age class at normal stocking.
Normative Economics: Economic theory that makes value judgments and prescribes what should be done to solve economic problems. See also positive economics 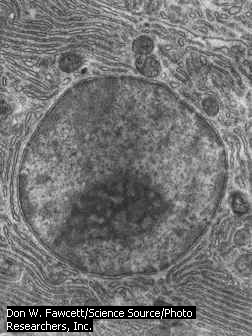 Nucleus: The nucleus, present in eukaryotic cells, is a discrete structure containing chromosomes, which hold the genetic information for the cell. Separated from the cytoplasm of the cell by a double-layered membrane called the nuclear envelope, the nucleus contains a cellular material called nucleoplasm. Nuclear pores, present around the circumference of the nuclear membrane, allow the exchange of cellular materials between the nucleoplasm and the cytoplasm.

Nurse log: A dead or downed log that fosters tree seedlings by protecting them from such environmental factors as wind, insolation, or frost, or by providing appropriate soil and microclimate.
Nurse tree or crop: A tree or crop of trees, shrubs, or other plants that foster another, generally more important, tree or crop. (Syn: trainer)

Nursery: 1. An area set aside for the raising of young trees mainly for planting out. Temporary nurseries, particularly those formed beneath a high canopy of large trees, may be termed bush nurseries. 2. A measurable piece of land duly fenced and utilized for productivity of an estimated number of saplings under intensive management.
Nursery bed: One of the specially prepared plots in a nursery where seed is sown or into which transplants or cuttings are put.
Nurse tree (nurse crop): A tree or crop of trees, shrubs, or other plants, either naturally occurring or introduced, used to nurture or improve the form of a more important tree or crop during youth by protecting it from frost, insolation, or wind.
Nutrient: [Mid-17th century. < Latin nutrient-, present participle of nutrire “nourish”] A substance that provides nourishment, e.g. the minerals that a plant takes from the soil or the constituents in food that keep a human body healthy and help it to grow. (See: Appendix; Table – 8)
Nutritive value: A term usually prefixed by “high,” “low,” etc., to indicate relative quality of given forage or feed to furnish elements valuable for animal nutrition.
Nymph: The immature stage of insects, following hatching, which does not have a pupal stage, i.e., incomplete metamorphosis (egg, nymph, adult). Late instar nymphs may have nonfunctional rudimentary wings and/or genitalia.
———-
Corrections and Suggestions are most welcome. Please use the comment section for feedback. If you see any missing terminology or any updated one or any latest term please use the comment section for the purpose. Also, if you have any image or data related to any above terminologies, don’t forget to mail me at tulaib_javid@yahoo.com.
Regards
Naeem Javid Muhammad Hassani